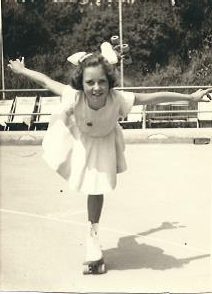 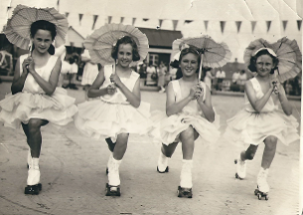 I started skating on the outdoor rink in Dovercourt, Essex when I was about 7 years old.

My mother helped out in the skate shop handing out hire skates in the summer when tourists were around, and l tried it whilst she was there and decided I liked it.   There was a professional man there teaching and he gave me lessons during the summer time when my mother was working.

To earn some money l decided to sell candy floss and toffee apples on the promenade opposite in a little kiosk where they wanted help, and this gave me money to spend on my own skates and lessons. Never did l think I would still be involved 70 years later!!

My mother sent me to London on the Grey Green bus once in two months to have lessons in Cricklewood, London and from there l came to be interested in competitions for free skating, although l always wanted to dance, but had no partner in Dovercourt, except my brother who wanted to speed skate only.

The floods hit the rink in the 1950’s and for weeks it was covered with muddy water which the club, with the help of my Mother, eventually cleared and we were back skating.

This continued throughout the winter, although being an open air place, with trees around one side it was difficult to skate during the winter periods but we did, wearing three/four sweaters and trousers to keep warm.

We did summer shows within the Club and it attracted many holiday makers and holiday camp people and this continued for many years, and eventually when we moved to live in Chadwell Heath, Essex, there were more facilities for me to continue with the sport l loved.

I eventually won a silver medal in a national competition for free skating and from there it continued.

Success as Champion for Dance

I found a partner, a London club, and became a dance skater and went on to be the British Champion for Dance for many years, silver medallist in European and World Championships and travelled the World competing in Dance Championships, doing exhibitions throughout the World, whilst having a full time job as a Secretary in the City.

I decided when giving up competitive skating l would like to give back to the sport l loved and took an examination to become a Judge and went on to Judge World and European Championships.

There had never been a woman on the World Committee and so it was unique to our sport to have a woman there, as the Committees were run always by men.

I was elected  President of the European Committee for Artistic Skating and remain in this position. We have encouraged many new judges, trainers, and of course skaters, over the years and continue to promote artistic skating wherever possible.