You are here: HomenextResortsnextClacton-on-SeanextClown Bertram by Norman Jacobs 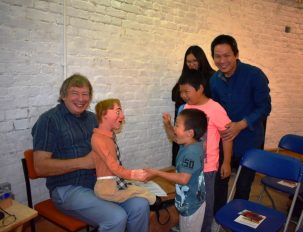 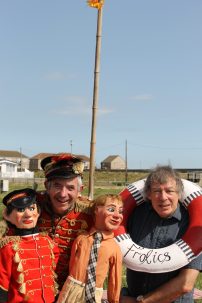 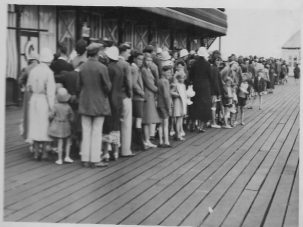 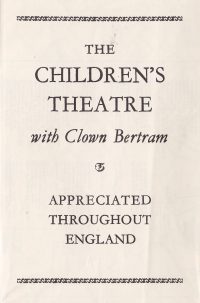 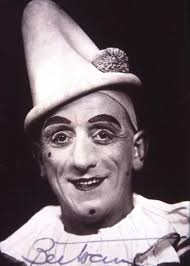 A short while ago a typical ventriloquist’s dummy came up for sale at an auction in Colchester and was bought by the Clacton & District Local History Society. But this was no ordinary dummy as it had once belonged to Clown Bertram and had entertained generations of children on Clacton Pier.

When Clown Bertram and Filbert arrived in Clacton in 1922, Clacton-on-Sea was still a fairly new seaside resort, having been created just 50 years previously as the brainchild of a Victorian engineer and entrepreneur, Peter Bruff. The first thing Bruff did after he’d bought the land he intended to turn into a seaside resort was to build a pier as, believe it or not, the easiest way to get to Clacton at that time from places like London, Colchester or Ipswich was by steamer. There was no railway and the roads were dire, even in the summer. So the pier was built purely as a landing stage for steamers to call at. There was no thought of it being used for any other purpose.

By the outbreak of World War 1, however, the railway had largely taken over as the main means of getting to Clacton. The future of the pier looked in doubt and it was put up for sale. As the war came to a close, a man called Ernest Kingsman bought it as a speculative venture to see if he could save it by turning it into something that would attract visitors in its own right, rather than just as a means of getting to a paddle steamer. By 1937, Kingsman had spent something like a quarter of a million pounds in doing just that. His additions included a roller coaster, a swimming pool (the first open air swimming pool to be built on a pier anywhere in the country) a dance hall, a large amusement arcade called the Crystal Casino, two theatres including the Ocean Theatre, along with dodgems, American Skeeball and a number of restaurants and other smaller amusement arcades. And it worked, as Clacton Pier became widely known as one of Britain’s leading tourist attractions, enticing visitors from far and wide and propelling Clacton in to the very top rank of seaside resorts, right up there with the Blackpools and Brightons of this world, with something like 100,000 visitors per week.

So what did Kingsman himself attribute this considerable achievement to? In an interview in Tit Bits in 1934, Kingsman claimed that the success of the pier as an entertainment centre began when an entertainer, who called himself Clown Bertram, wandered into his office and asked for a job. Bertram, whose real name was Albert Edward Harvey, arrived in Clacton having had some experience of entertaining. He was born in London in 1888 and had toured minor music halls and variety theatres as well as performing at children’s parties with a novelty music act, in which he played the part of a clown. But he was unable to find much work and, at one time, nearly starved to death. It occurred to him that a summer season at a seaside resort might be the answer so he took the train to Clacton, where, unfortunately he discovered that all the summer shows had already been booked and there was no room for another act. Disconsolately, he walked along the pier and, on the spur of the moment, put it to Ernest Kingsman that what he needed was a children’s entertainer and he was just the man for the job.

With nothing to lose, Kingsman agreed to give him a chance to show what he could do, offering him a week’s trial. The next afternoon Kingsman watched Bertram’s first children’s show and was absolutely dumbstruck. He told Tit Bits that “At the end of the Pier, a thousand people were standing, and scores of children sitting on the carpet, and they were shrieking with laughter…it was a riot.”  He knew there and then that the future of the pier lay in entertaining people and that this man, Clown Bertram, had to be a part of it.

Having seen what he could do, Kingsman offered him a permanent job for the season at a far higher rate of pay than Bertram was originally going to ask for so he accepted on the spot.

Initially, Bertram continued to appear in the open with a large carpet for the children to sit on and deck chairs at the back for the mums and dads. His performance consisted of a few songs with a banjo, some conjuring, competitions for the children and, of course, a riotously funny conversation with the irrepressible Filbert, the dummy which the Local History Society bought at the auction. He could play 12 musical instruments and invented a number of original magic tricks, including his own anti-gravity wand, the changing die, the fairy tree and Disabell, a charming effect with a bell, later marketed by leading magic dealers such as Harry Stanley and the Supreme Magic Co. He also presented chapeaugraphy and Troublewit.

The Children’s Theatre for Clown Bertram

But, with so many standing trying to get a look at his shows, it was obvious he needed something better than a carpet and a few deck chairs, so Mr Kingsman built him his own theatre, the Children’s Theatre, near the end of the pier. The building contained seats for 500 paying audience and was always full, with queues forming literally hours before the performance was due to start.

Because of this, he was later moved into the Jolly Roger Theatre (renamed the Jollity for him). This seated over 1000 and still there were many times when the house was full and people had to be turned away.

He performed twice a day with two 90 minutes performances, one in the afternoon and one in the evening. Queues for the second house would literally form as soon as the first house went in.

Occasionally, he invited guest artistes on to his show. For example on one occasion the eighty year old Charles Coburn came on to sing Two Lovely Black Eyes. After a while, Bertram began to employ juvenile professional talent to support him. These became known as his “Bright Young Things” and they would sing and dance and take part in comedy sketches. As well as these young professionals, Bertram held amateur talent competitions with prizes awarded to the best youngsters. Warren Mitchell won this competition twice as a six year old dancer. He was so good that, after the second occasion, Clown Bertram said to him, “Look, don’t enter the competition because it’s a bit unfair but I’ll give you a prize if you’d like to come up and entertain.” Mitchell thought that Hollywood was beckoning as he received his first “professional contract”. Another youngster to win a prize on his show was Jimmy Hanley.

He also organised competitions for children including balloon blowing, skipping, who could make the funniest noise and who could give the funniest answer to questions such as, “What do you want to do when you grow up?”

Although he loved encouraging the youngsters and was able to use them as part of his act, Bertram’s main fear was the epic poem as these could kill an audience stone dead. He once recalled how one young boy started to recite The Death of Nelson at half past three on a Wednesday afternoon and by six thirty on the Thursday, poor old Nelson was still on his way to Heaven. A bit of an exaggeration of course, but when a girl announced she was going to recite The Arab’s Farewell to his Steed, he groaned inwardly. The little girl proudly stepped forward and said,

Throughout his show, Bertram was noted for his quick witted ad-libs, which had the audience in stitches. His sharpness was his great strength and he played on it for all he was worth. Both young and old would cheer, clap, scream with laughter and everyone would get caught up in the incredible atmosphere created by this man. In an interview for Clacton Chronicle (journal of the Clacton & District Local History Society), Warren Mitchell said that their family holidays to Clacton actually revolved around getting ready to see his shows, so that, for example, meal times had to be planned meticulously to allow time to get in the queue. I suspect his family wasn’t the only one. After a while Clown Bertram became synonymous with Clacton. Even today, although with the passage of time there are fewer and fewer people who actually saw him, those that did still recall him and his shows as the highlight of their holiday rather than all the big stars who came to Clacton in the 1920s and 30s to appear in theatres like the Palace Theatre, Ocean Theatre and the West Cliff Theatre.

Sadly, the show came to an abrupt and forced end when war broke out in 1939, and although Bertram continued to appear locally in village halls after the war, he never again returned to the pier. He died in 1953, not long after giving his last show in Weeley Village Hall.

“As you will have seen I published your letter. The result of which has staggered me. I have had hundreds of letters from mothers and fathers now with children of their own, all couched in terms of the greatest affection and remembrance of the Children’s Theatre. I have never known such a wealth of affection for a man whom they met perhaps only once or twice, or one remembered for the pleasure he has given. What grand work you must have done for children.”

The editor of the Daily Mirror had discovered something that Clactonians and holidaymakers had know all along – Clown Bertram was someone very special and dear to the hearts of all who saw him.

It is hoped that by the time this article sees print, Filbert, together with some of the archive material and a couple of Clown Bertram’s original magic tricks, will be on display on Clacton Pier, back where they belong and where future generations can find out all about this incredible man and what made him such an extraordinary entertainer.